There are two kinds of people at Muscle Beach Venice: those who are working, and those who are watching. Why isn't the second group getting in on the action? They're nervous, they're intimidated, and they're just not ready—yet. But with these nine moves, they could be.

Looking for your next strength and fitness goal? Get good—not just proficient, but seriously good—at these nine movements. Then, when you get to the beach, you'll be ready and able to step up to the bar. And what's more, you'll have a physique that's ready to show off there, too. 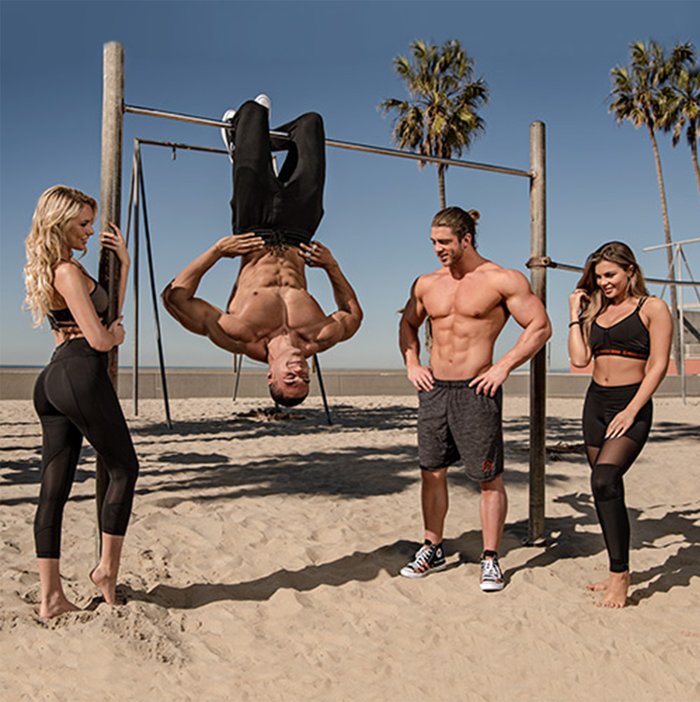 Why bring a rope to an outdoor gym like Muscle Beach Venice? Because this is the ultimate warm-up for running, playing, lifting—pretty much everything. It raises your core temperature while boosting coordination and bodily awareness, at the time when you need these things most. It also pushes blood to pretty much all of the musculature of the lower body, as well as the core, the upper back, and the shoulders—especially once you start working harder, or using a slightly heavier rope.

But here's what else is great about jumping rope: It's nearly impossible to do with bad posture. Seriously! You're ramrod straight from the get-go. You can't say that about running, cycling, or most of what passes as "fitness" out there.

Oh, and it burns a ton of calories. There's that.

How much: As a warm-up, you can achieve a lot with just 2-4 minutes of jumping, alternating double-foot and single-foot jumps in equal increments. If you have a clock, alternating every 30 seconds is great. Otherwise, you can do every 20 skips. If you're good enough to do cross-overs and double-unders, then have at them.

Crawling is another great body-powered exercise that has been experiencing a resurgence among non-babies in recent years. You'll see fighters doing it, functional movement bros doing it, and even elite ballers. So…why do it on the stairs? Let us count the ways.

For one, even with the added challenge of moving uphill, you can crawl on the stairs faster, and more athletically, than you can on the ground. Sure, you'll biff it a few times at first, but pretty soon, you'll be a pro.

Second, crawling on the ground usually ends up being limited by upper-body strength or endurance. Crawling on the stairs demands more of the legs, allowing you to do more work, and give yourself more of a cardiovascular challenge. But don't worry, your shoulders and back will still get their share.

There's plenty more to like about crawling, but rather than read about it, just go try it.

How much: Mix 1-2 flights of stairs into strength circuits, or do it for time—say, 30 seconds on, 30 seconds off. But remember: crawl up, walk down. Crawling down is a recipe for lost teeth.

If you need a "why" for pull-ups, well, just go look at a Muscle Beach athlete on any given day. They treat pull-ups as an art form, and their backs show just what years of bodyweight mastery can do. 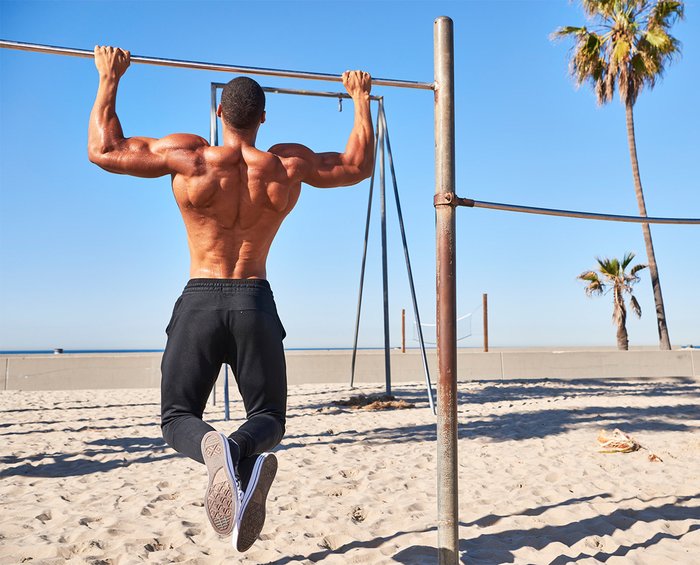 So, let's talk how. You've got a world of choices. The basics: Neutral-grip pull-ups, chins, shoulder-width pull-ups, wide-grip pull-ups, and if your shoulders don't mind, behind-the-neck pull-ups. Next level: L-sit pull-ups, weighted pull-ups, archer pull-ups, typewriter pull-ups, super-slow or super-fast pull-ups, reps with pauses at all points, and walking-on-air pull-ups. Beyond that, just keep mixing it up and trying new challenges.

How much: Pull-ups can be trained for strength, explosiveness, or for size, depending on the variety and the rep range you can handle. That's up to you, but as a general rule, stopping a rep or two short of failure, or at 80 percent effort, on most sets allows you to do more total work.

Ever wonder why they call it a medicine ball? Because it dates back to Hippocrates, the ancient Greek physician, who supposedly had his patients toss around weighted leather balls as part of rehab. So yeah, it's old school and then some.

But what does the ball have to offer you? Kind of like jumping rope, it's a movement that demands you use all manner of upper, lower, and core muscles simultaneously. But unlike jumping rope, you're generating something close to maximum effort and explosiveness on each rep. And yes, to be clear, that's fun—but it also primes your nervous system for serious action in the rest of your workout, especially if you're training upper body.

How much: Do 2-3 sets of 5 reps, resting just enough between reps to really explode into each one. If you're going to do straight-up slams, watch your face and family jewels. Otherwise, you can do rainbow slams to the side, or just toss a med ball around with someone for a few minutes.

Kind of like pull-ups, Muscle Beach Nutrition athletes have a full arsenal of dip varieties. Once your shoulder and core strength gets to a certain level, the sky is the limit here. What all varieties share is that they're unreal chest and triceps builders, and you need nothing more than a couple of bars to go to town. Also like the pull-up, it's a sneaky-good core movement, especially if you do them on the rings.

How much: This is really up to your ability. The easy answer is 2-3 sets of near-max reps, or if you're up for a real hoot, one rest-pause set of 50. To do this, take a single set to near failure, rest for 10-15 seconds, and repeat until you've hit 50. Break it up however you need to get it done, but get it done.

What a difference it makes moving this movement from the ground to the parallel bars (or, in a pinch, any elevated corner). It's more like an alternating knee raise, and your core will instantly notice the simple change of moving fully against gravity rather than kinda-sorta against gravity. For extra fun, do these supported by your hands, like the top position of a dip, pressing hard into the support and keeping your arms straight and shoulder blades depressed.

That's a great way to work the serratus anterior, an important muscle for shoulder health that also happens to be one of the hallmark features of golden-age Muscle Beach physiques. It's that little group of horizontal "fingers" on the side of your ribcage, between the pecs and the abs. Yeah, you know you want that.

This is the poor man's stair climber, and it's also the movement on this list that'll make you limp tomorrow. You can add weight if you want, like a sandbag, light bar, or a beach bunny cradled in your arms, but it's plenty difficult without those. 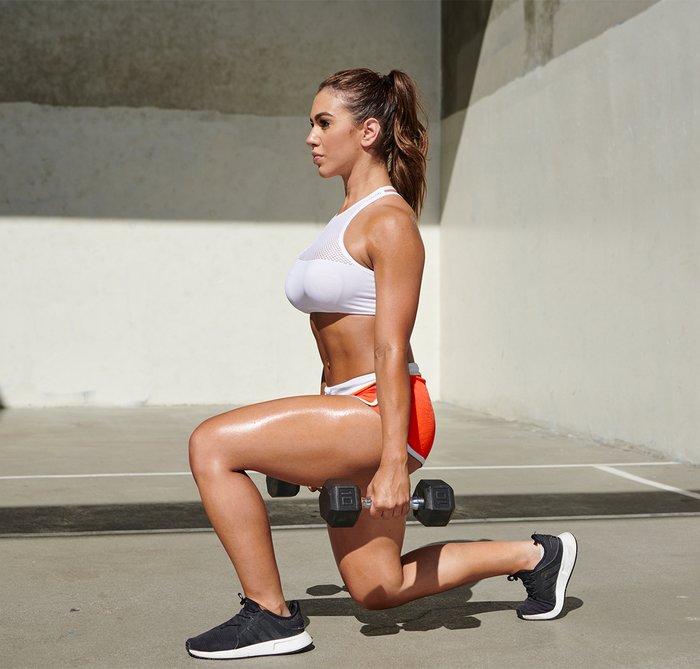 You can perform these like stair climbs, or you can perform them like step-ups. Either way, your quads and butt will be instantly on alert. If you go the step-up route. Keep the eccentric nice and slow, and these will give you everything that squats do.

How many: Do 2-3 sets until it really sucks, and, on occasion, do something like 10-12 minutes straight of them just because.

Sometime around the 1980s or so, the bench press became the unofficial measure of what makes a man in the gym, but out on the beach, the push-up has always reigned supreme. No matter who you are, and what point in your fitness journey you're at, you can benefit from keeping some type of push-ups in the mix.

Why? Let's not dwell on the science, but deep, full-ROM push-ups are actually great for shoulder health, not just for building the muscles of the chest, shoulders, triceps…and core, and upper back, and that serratus we were talking about earlier. The bench can't say that! This makes push-ups the best preparatory for benching, and they (and dips) are also the best finisher on chest or upper-body days. 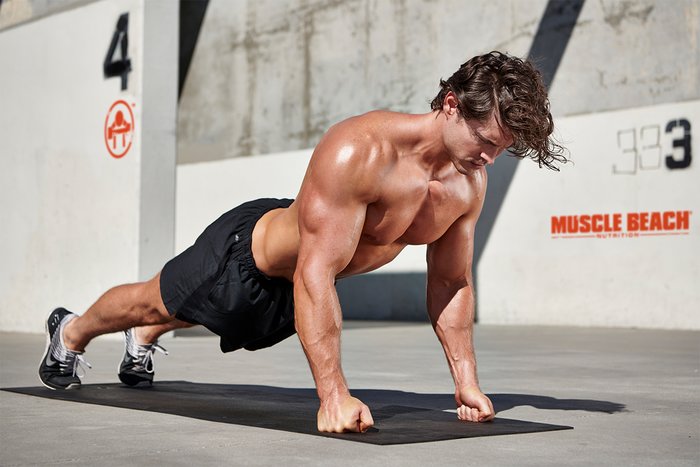 How much: Once you can do 30 at the drop of a hat—and we're being generous there, because plenty of old schoolers would draw the line at 50 or 60—you can go crazy with Spiderman push-ups, single-arm push-ups, and everything else you can dream up.

Here's a true insider's secret from a Muscle Beach athlete: A body worth taking your shirt off for isn't just built with rows or pull-ups, it's built with pulls from all angles. Want proof? Try an angled pole climb, or its even more infamous beach cousin, the rope climb. Then see where and when you're sore tomorrow. The answer will probably be "everywhere" and "every time I take a breath." But kind of like crawling, if you add a little simian influence to your training, you just might see everything get stronger, bigger, and more badass.

How much: Definitely not to failure, monkey boy. Respect it, get better at it, and do it within reason.